Rails 2.2 delivers a number of new and improved features. This list covers the major upgrades, but doesn't include every little bug fix and change. If you want to see everything, check out the list of commits in the main Rails repository on GitHub.

Along with Rails, 2.2 marks the launch of the Ruby on Rails Guides, the first results of the ongoing Rails Guides hackfest. This site will deliver high-quality documentation of the major features of Rails. 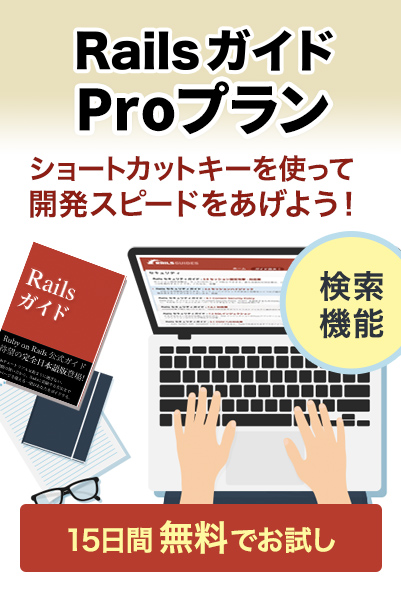 Rails 2.2 is a significant release for the infrastructure that keeps Rails humming along and connected to the rest of the world.

Rails 2.2 supplies an easy system for internationalization (or i18n, for those of you tired of typing).

1.2 Compatibility with Ruby 1.9 and JRuby

Along with thread safety, a lot of work has been done to make Rails work well with JRuby and the upcoming Ruby 1.9. With Ruby 1.9 being a moving target, running edge Rails on edge Ruby is still a hit-or-miss proposition, but Rails is ready to make the transition to Ruby 1.9 when the latter is released.

The internal documentation of Rails, in the form of code comments, has been improved in numerous places. In addition, the Ruby on Rails Guides project is the definitive source for information on major Rails components. In its first official release, the Guides page includes:

All told, the Guides provide tens of thousands of words of guidance for beginning and intermediate Rails developers.

If you want to generate these guides locally, inside your application:

3 Better integration with HTTP : Out of the box ETag support

Supporting the etag and last modified timestamp in HTTP headers means that Rails can now send back an empty response if it gets a request for a resource that hasn't been modified lately. This allows you to check whether a response needs to be sent at all.

The work done to make Rails thread-safe is rolling out in Rails 2.2. Depending on your web server infrastructure, this means you can handle more requests with fewer copies of Rails in memory, leading to better server performance and higher utilization of multiple cores.

To enable multithreaded dispatching in production mode of your application, add the following line in your config/environments/production.rb:

There are two big additions to talk about here: transactional migrations and pooled database transactions. There's also a new (and cleaner) syntax for join table conditions, as well as a number of smaller improvements.

Historically, multiple-step Rails migrations have been a source of trouble. If something went wrong during a migration, everything before the error changed the database and everything after the error wasn't applied. Also, the migration version was stored as having been executed, which means that it couldn't be simply rerun by rake db:migrate:redo after you fix the problem. Transactional migrations change this by wrapping migration steps in a DDL transaction, so that if any of them fail, the entire migration is undone. In Rails 2.2, transactional migrations are supported on PostgreSQL out of the box. The code is extensible to other database types in the future - and IBM has already extended it to support the DB2 adapter.

Connection pooling lets Rails distribute database requests across a pool of database connections that will grow to a maximum size (by default 5, but you can add a pool key to your database.yml to adjust this). This helps remove bottlenecks in applications that support many concurrent users. There's also a wait_timeout that defaults to 5 seconds before giving up. ActiveRecord::Base.connection_pool gives you direct access to the pool if you need it.

You can now specify conditions on join tables using a hash. This is a big help if you need to query across complex joins.

The new bang! version of find_by_attribute! is equivalent to Model.first(:conditions => {:attribute => value}) || raise ActiveRecord::RecordNotFound Instead of returning nil if it can't find a matching record, this method will raise an exception if it cannot find a match.

Active Record association proxies now respect the scope of methods on the proxied object. Previously (given User has_one :account) @user.account.private_method would call the private method on the associated Account object. That fails in Rails 2.2; if you need this functionality, you should use @user.account.send(:private_method) (or make the method public instead of private or protected). Please note that if you're overriding method_missing, you should also override respond_to to match the behavior in order for associations to function normally.

On the controller side, there are several changes that will help tidy up your routes. There are also some internal changes in the routing engine to lower memory usage on complex applications.

Shallow route nesting provides a solution to the well-known difficulty of using deeply-nested resources. With shallow nesting, you need only supply enough information to uniquely identify the resource that you want to work with.

This will enable recognition of (among others) these routes:

You can now supply an array of methods for new member or collection routes. This removes the annoyance of having to define a route as accepting any verb as soon as you need it to handle more than one. With Rails 2.2, this is a legitimate route declaration:

By default, when you use map.resources to create a route, Rails generates routes for seven default actions (index, show, create, new, edit, update, and destroy). But each of these routes takes up memory in your application, and causes Rails to generate additional routing logic. Now you can use the :only and :except options to fine-tune the routes that Rails will generate for resources. You can supply a single action, an array of actions, or the special :all or :none options. These options are inherited by nested resources.

Action Mailer now supports mailer layouts. You can make your HTML emails as pretty as your in-browser views by supplying an appropriately-named layout - for example, the CustomerMailer class expects to use layouts/customer_mailer.html.erb.

Memoization is a pattern of initializing a method once and then stashing its value away for repeat use. You've probably used this pattern in your own applications:

Memoization lets you handle this task in a declarative fashion:

The each_with_object method provides an alternative to inject, using a method backported from Ruby 1.9. It iterates over a collection, passing the current element and the memo into the block.

If you delegate behavior from one class to another, you can now specify a prefix that will be used to identify the delegated methods. For example:

In Railties (the core code of Rails itself) the biggest changes are in the config.gems mechanism.

To avoid deployment issues and make Rails applications more self-contained, it's possible to place copies of all of the gems that your Rails application requires in /vendor/gems. This capability first appeared in Rails 2.1, but it's much more flexible and robust in Rails 2.2, handling complicated dependencies between gems. Gem management in Rails includes these commands:

You can unpack or install a single gem by specifying GEM=_gem_name_ on the command line.

A few pieces of older code are deprecated in this release: